Not a lot has happened in Novatones’ Harmony Chorus since last time I wrote. The influence of the Covid19 isolation has had quite a big effect on our rehearsal format and of course there have been no performances. We have become quite adept at using Zoom however, something that most of us had never heard of until this year!  Now these little screens are quite familiar to us!

We did try separately recording individuals singing our parts and combining them together, without much success, due partly to synchronising issues.  Then the Covid 19 restrictions lessened a bit and we were allowed to have up to ten in a group singing together, but only outdoors.  We had to find an open covered area somewhere in town, where we could sing, well-apart from each other and still hear others singing.  After scouring the city for a suitable venue, the former railway work-sheds at Newcastle East within the newly constructed Foreshore Park, provided us with a good venue for our wintry outdoor rehearsals.   These large steel structures used to be enclosed buildings, however since the closure of heavy rail at this eastern end of town, the walls have been removed.  They now provide shade and cover for community events, and combine well with the lovely new parklands adjoining. The shelters however are fairly close to residential medium-density development, so we were careful not to annoy the neighbours, by singing too loudly or making excessive noise.   We were well aware that there is a general ongoing ‘friction’ in Newcastle, between those supporting the live music industry and increasing residential development. Recent Letters to the editor have mentioned instances of inner-city residents clashing with Music Venues regarding noise and disturbances. Varying uses of quiet residential living and entertainment have long been at odds, but, as one wag put it, this friction has become more vocal, since Newcastle City became a ‘retirement village’ 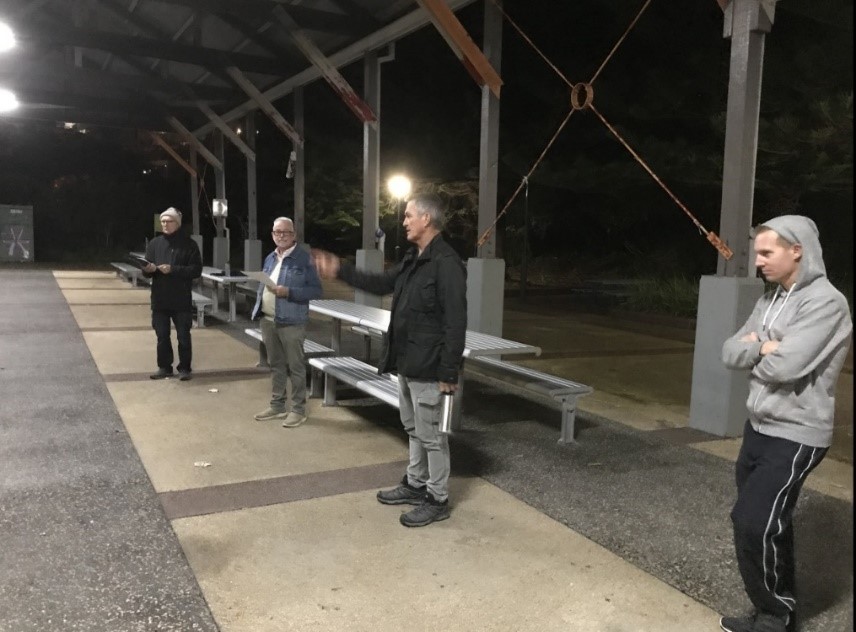 Director Peter Donald has been able to run the group in spite of lots of difficulties- always aware of doing the right thing by abiding by Covid19 rules, but with the group’s interests at heart.  He achieved this by having smaller groups arriving at the shelter sheds at differing times, often with one or two singers from one group, doubling up to sing in the next group. This was needed as some of the parts had low numbers.  We did manage to sing a combination of new and older songs at each sitting.   Then, last week came the news that we were all waiting for- ‘Rehearsal allowed back at the Club! Monday Night saw some resemblance of normality return to the group.  That was when Novatones Chorus met back at Club Charlestown and the general feeling was of relief! It certainly was good to be back singing together, out of the cold, windy and wet outside-conditions, like in the photo above.

We realise that we have a lot to catch up on and perhaps have not progressed as much as we could have during the difficult isolation period, so it was good to see a strong rollup at our first session back at the Club and to see everyone being enthusiastic towards getting back to our common passion of singing together in harmony!