As the frantic 2019 Christmas season heats up, Novatones Harmony Chorus has been kept on its toes, with lots of Christmas singing engagements, as well as other fund-raising singing events.  This is our busiest time of the year and is the period where we can make some money, not only to cover our chorus and other costs, but also to raise funds for our main charity:  Ronald McDonald House.

Currently we are committed to a multi-weekend pre-Christmas singing engagement for Newcastle Council at a popular Sunday visitor hub on the edge of Newcastle Harbour next to the big Christmas Tree at Queen’s Wharf. 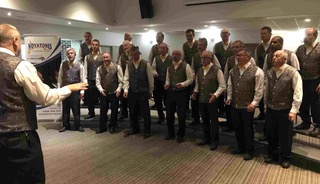 As well we have been in demand at the big local shopping malls at Kotara and Charlestown, singing carols at various locations around the centres. The Christmas season seems to be starting earlier and earlier! On 9th November at Westfield Kotara Shopping Centre, we joined in the fun of ‘Santa’s arrival’ where we sang on stage to open the event and afterwards joined in the procession which was led by a small New Orleans’-style jazz band, all around the centre. The large entourage included Santa & Mrs Santa, Novatones, a couple of local sporting teams and a bevy of actors dressed in kid’s hero costumes.  We attracted a lot of attention, especially by highly-excited shop workers, who get little access to interesting events within the confines of their small shops.

Other more-formal functions that we have also been happy to be part of, included singing at the opening of a designer-awards day at Newcastle TAFE and taking part in the annual multi-cultural mass-choir singing event at the Sacred Heart Cathedral in Newcastle.  Less-formal events have been good fun as well- particularly a memorable night at our own Christmas party in our own room at the 16 Footers Yacht Club on the edge of Lake Macquarie and a pub-crawl in Beaumont St Hamilton.

Before Christmas, there are a number of Novatones singing events still to come. There will be more carolling around the shopping centres and other Christmas-party obligations to come. However it is often the little things that stick out in our minds, things that make singing in public so worthwhile! One such occasion epitomised what singing in a barbershop chorus means to the group- This impromptu ‘feel-good’ moment happened while we were singing outside Coles at Westfield. An older chap came up to us and said that he had heard us before and wanted to know if we would sing ‘Barbara Ann’?  Of course we complied and he loved it! With tears in his eyes he told us that his wife, who had passed away recently, was named Barbara.  He gratefully put $10 in our bucket.