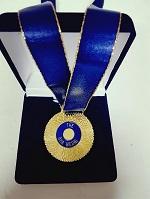 The BHA National Council is pleased to call for nominations for the 2018 BHA Medal.

First awarded in 2017 to Mike Donnelly, the BHA Medal recognises an individual’s exemplary contribution to the advancement of barbershop in Australia.   It will be awarded to a current BHA member in good standing who has consistently “put in” for barbershop.

The award is made for sustained outstanding leadership, innovation, influence or initiative development, which has resulted in an exemplary, transparent and publicly evident advancement of BHA. They will be recognised nationally for their sustained contribution for the association, their club, their community, or behind the scenes.    In limited circumstances, individuals may also be considered for nomination whilst no longer an active member due to retirement on the basis of incapacity.

Nomination for the BHA Medal must be made in writing and may come from individual BHA members, Regional or Club Committees.

Each nomination will be assessed by a subcommittee of independent (i.e. not involved in nominating or being a nominee) BHA members appointed by the BHA Council. If awarded (at the absolute discretion of the BHA Council), the BHA Medal will be presented at the next available national convention.

The award is kindly sponsored by Derek Cosburn, who said “Since my first introduction to barbershop singing at Dreamworld in about 1981-2, I have been the recipient of a quite a few medals during the time I’ve been involved, and I have for a number of years had the thought that I’d like to give back in some small way. I would like to help in the promotion of a medal that I’d hope would have some meaning to the recipient, and to all members within our society who may not attain one through singing, but deserve one because of other efforts.”


Nomination Criteria to be Addressed
(There could be many and varied reasons that set the nominee as an exemplar to the barbershop community.  Below are few ideas, but not an exhaustive list)

Most importantly, in relation to the criteria above (or any other criteria thought relevant) the evidence of the nominee’s contribution to the advancement of BHA needs to be clearly stated.

At this time it is envisaged that nominations will be treated in confidence as only one BHA medal will be awarded each year, however, at the discretion of the BHA Council, Nominees and a summary of the reason for their nomination may be read out at the presentation ceremony and be accorded with due applause and acknowledgement.    The winner will then be presented with the medal.

Nominations must be received by the BHA Executive Officer, Jeannie Hattendorf admin@barbershop.org.au, by close of business on Tuesday 28th August 2018.


For clarification on any aspect of the BHA medal purpose or nomination process please contact VP Membership via email on membership@barbershop.org.au