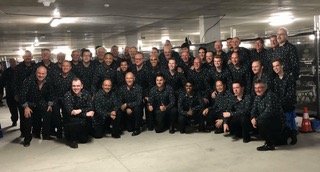 “Spot the camera” was the call as we came off  from our final afternoon rehearsal for the Commonwealth Games closing ceremony. - a little more on that later.

This week saw the Blenders participate in the biggest event in our 30 year history - the closing ceremony of the Commonwealth Games. Huge congratulations go to our team which started negotiations with the Closing Ceremony Team many months ago. Without them we would not have been part of this event. To get a behind the scenes look at the organisation, rehearsing and feeding a cast of 1500 people was an experience to say the least. At rehearsals there was many an hour of down time, but we managed to put the time to good use as we entertained, taught tags and supported other cast members. The small section rehearsals that we started out with months ago morphed into the huge production shown on the night.

Originally our spot was just 55 seconds, a small part in a very big cast. But then to be invited back to sing with headliner Archie Roach and other performers such as Anthony Cellea, The Veronicas, Guy Sebastian, Katie Noonan and Kate Ceberano and the other members of the ‘star cast’ in the finale was was a huge honour and one which none of us will ever forget.

“Spot the camera” (spider cam) became a problem for the night performance when the camera became camouflaged in the night sky but we rose to the occasion and managed to get our bearings and cries of “where was the camera, I couldn’t see the camera”, became the talk as we walked off, but  we all agreed most of us managed to get our bearings and find it. After a very long week we all traipsed home by whatever means we could with sore feet, tired and exhausted but all the better for a fantastic experience.

The same week as closing ceremony rehearsals The Blenders also sang as part of the Bleach Festival and the next day helped celebrate Centenary of Southport which was followed by a full dress rehearsal for the closing ceremony on the same day - a very long day.

We are now switching into ANZAC day mode, preparing for Regionals, singGC (June) and Voices In Paradise (July) - a busy time for us ahead.