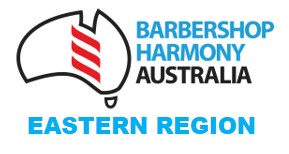 As a first-time attendee I was impressed with the whole weekend and how well, and how smoothly everything went.  At the peaceful and delightful Myuna Bay Sport and Recreation Camp, accommodation is in bunkhouses containing multiple rooms, each having  three double bunks and its own toilet and shower room.  The location was perfect for our use, as barber-shoppers in that there were plenty of communal rooms, a large hall, verandahs and other areas where small and large groups could congregate.

What a great weekend it was for all who attended: meeting new friends, catching up with old friends, learning new techniques, rehearsing, performing and generally having fun and singing with like-minded people.  I understand that a lot of how well the event ran was, in no small part, due to the hard work, and dedication of local resident and Soundwaves member, Stuart Adey.  Stuart’s wife Beth prepared some delicious dishes for the group.  Chorus members were each allotted a name badge, which had a colour on it.  This colour denoted kitchen-related tasks that were to be carried out by that colour group, such as cooking and serving dinner and later collecting, washing up, drying and stacking dirty dishes, plates, cutlery etc. All members seemed to work in ‘Harmony’, cheerfully carrying out their jobs.

As advertised, we were lucky to have the benefit of such great singing coaches as Rob Sequeira, Jonathan Albertini, Kieran O’Dea and David Reid. All these men are great barbershop singers and have a wealth of musical/barbershop singing knowledge.  The tutors happily imparted some of this knowledge to others at specific talks, which attendees chose to go to, at various times. Any barbershop member who wanted to have a one-on-one PVI with one of these educators, was given this opportunity. The tutors were very generous with their time and advice. Also quartets from multiple choruses were given lengthy advice on how to improve their performances, by the tutors.

There was one additional educator who was not on the original list.  His name is Russell Bailey, formerly of Tasmania, but now living and studying at Wollongong. Russell, a singing coach and former chorus director, was asked if he would like to come along and participate in the weekend’s learning activities. People that I spoke to were very impressed with his insight into barbershop singing generally and particularly enjoyed his session on ‘making chords ring’.


Considerable time, on Friday and Saturday, was spent by all the educators with the whole group of chorus attendees, in learning and rehearsing the song: ‘If I Only had A Brain’.  This song, from the ‘Wizard of Oz’, was sung as the finale, by the combined chorus group at the East Coast concert on Saturday Night, at the Wangi Wangi Worker’s Club.