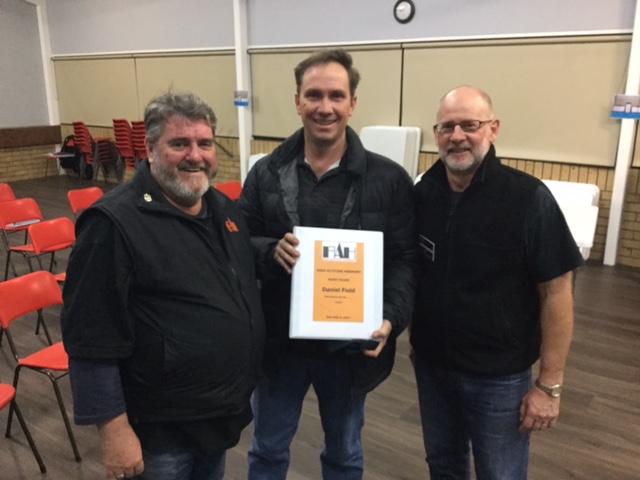 We recently held an Open Night and out of the eight or so hopeful choristers that came along we have managed to entice three men to join us. All three have since qualified, so much so that two blokes, Denis and Bill joined us at Sunshine Regionals and helped us towards a third place behind Sound Connection and The Blenders. To say we were stoked is an understatement. Dan (our third Lead) was inducted last week at rehearsal and he’s pictured receiving his HAH T-shirt and Music Folder from our President, Peter Devey and Lead Section Leader, Cameron Broom. That’s what we like to see. More Leads.

We have been having some intensive chorus coaching from Jono Albertini and Dan Koopu from The Blenders. And the difference is amazing. One thinks that all the words, notes and vowels are in place and then these two come along and you realise how much you don’t know. However, I’m sure they are the reason we performed so well at Regionals. Thanks guys.

Over the last few years we have been conducting a Singing Restaurant which has been a lot of fun and also contributed to our financial bottom line. This yearfor a change we are having a Variety Concert at our adopted home, the Philharmonic Centre. It’s on Saturday August 26, with a matinee and an evening show. If you are in the vicinity of Toowoomba come along and have a great time with, not only HAH but, many invited guest artists.

The prospect of PanPacs is looming large and we are working hard at perfecting our show-stopper competition pieces. We are looking forward to the competition in Sydney and also catching up with all our barbershopper friends. See you there!

And don’t forget. You can always catch up with HAH on Facebook. We are constantly putting up interesting music clips and other trendy stuff for your enjoyment. And visit us on our web-site haharmony.com.au