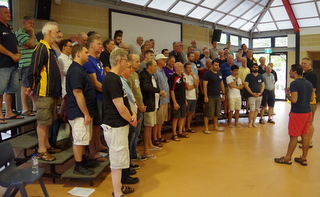 On Friday afternoon 24 February 2017, over sixty barbershoppers from throughout the Eastern Region wended their various ways to the Myuna Bay Sports and Recreation Complex on the shores of the beautiful Lake Macquarie, 90 minutes drive north of Sydney. They were all heading, with great anticipation, to the 2017 BHA Eastern Region Harmony College organised by the ER Council. This workshop was the latest in a long series of similar annual events which first started way back in the early nineties.

The sixty plus delegates were drawn from almost every Chorus in the Region including; Soundwaves, Novatones, Hills Harmony, Sydney Harmony, Penrith Harmony and Canberra Chordsmen.

Special Mention should also go to Sydney based youth chorus, Vox Canvas who attended with virtually all their members and to our newest Chorus, South Lakes Harmony, who attended with their entire membership of eight enthusiastic "non-youth" barbershoppers including long time MC extrordinairre Bob Fritz who showed us that he still had it by expertly MC'ing the Showcase on Saturday Night.

The faculty comprised highly experienced and personable Kiwi educator, Jill Rogers together with the guys from medal winning quartet, Cataylst including the very talented Rob Sequeira (who had the unique experience of coaching his dad, Malcolm who was one of the delegates) , the dynamic Jonathan Bligh, David Reid, one of the most unassuming (not!) and talented basses around and, lastly, but not least, the inimitable Richard Reeve.

The program ran from Friday evening through to midday Sunday with a great mix of work and fun. The late night (read early morning) afterglow sessions were, as always, a feature and continued to develop the fantastic camararderie existing amongst the eight choruses represented.  The highlight was the Saturday night showcase where we had the opportunity to perform in front of our peers as well as a paying audience at the Wangi Wangi RSL Club.

The show included a very creditable performance by the combined singers, masterfully conducted by Rob Sequeira, performing the new song we had all learnt from scratch during the weekend "The way we were".

Special mention must go to the guys from Soundwaves and Novatones who provided most of the manpower and organisation and, in particular, Stuart Adey and his wife Beth who provided virtually all the catering for the weekend enabling the overall cost to be kept extremely low. Well done and thank you Stuart and Beth.

Eastern Region President, Brian Bleakley, confirmed during his wrap up, that we would be back again around the same time next year.